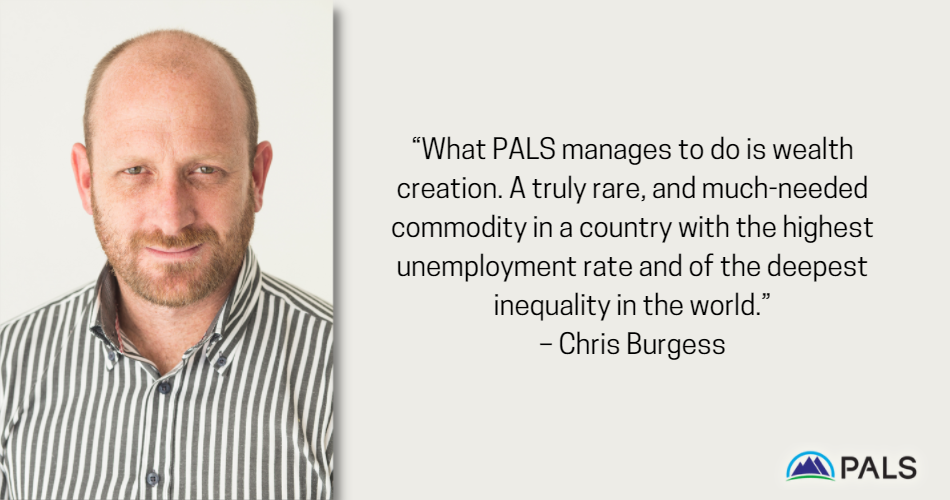 This is the column where Perspective asks well-known opinion formers to give their views on PALS and its mission.

Landbouweekblad editor Chris Burgess grew up on an extensive stock farm in the north Eastern Cape. Today he runs a small cattle herd with a commercial farmer friend of his up country. Chris counts the Bela-Bela Land Reform Summit as one of the highlights of his career to date as editor of this 100-year-old farming brand. The summit showcased South Africa’s best land-reform efforts and inspired many that a better future for the country was actually possible. Gerrit van Vuuren, Partners in Agri Land Solutions co-creator, was one of the speakers at the summit.

What is your perspective regarding the effectiveness and success of PALS in terms of the following angles?

That depends on what is meant by political. If it refers to the crony-capitalism, parasitic patronage networks, and vulgar self-enrichment that still sadly seems to be the main political aim of most of our politicians, then no, I think PALS has been a dismal political failure. But if political refers to the wonderfully hopeful, and boisterously optimistic vision that tata Nelson Mandela had for this country, one where we all would together build a country prosperous and at peace with itself, then I can hardly think of more pure distillation of Madiba’s vision than the farmer-driven PALS land-reform and farmer-development initiative.

What’s there not to like? A true win-win commercial arrangement is difficult at the best of times in the brutal world of commercial farming. It’s a world of thin margins and deep pockets, where one mistake can wipe you out. As if that’s not difficult enough, then you must still try and insist that this arrangement should positively transform society. Then you’re really stacking the odds up against yourself. But PALS gets it right, which makes it a true business unicorn.

PALS establishes successful commercial farmers, and that’s never easy. Being a farmer is a tough and complex job. That makes the fact that these farmers are black, truly beside the point. They already compete with the best in the world.

What PALS manages to do is wealth creation. A truly rare, and much-needed commodity in a country with the highest unemployment rate and of the deepest inequality in the world.

Growing the economic cake in these conditions is never easy. So new entrants farm in partnership with successful commercial farmers. Businesspeople who have paid expensive school fees by making mistakes. This institutional knowledge is a crucial ingredient to any farming success. With access to all the networks and knowledge that makes their partners successful, new entrants are leapfrogged into serious farming with a real chance at success.

This business miracle is made possible by the many hours of hard slog and some pretty visionary thinking by local Ceres lawyer and PALS co-creator Gerrit van Vuuren and his able staff, assisted by a board of directors blessed with some of the best farming and business talent in the country. A dream team of farming.

I suppose the transformation first takes place at a very personal level. Two individuals realising that they can work together and trust each other in business. This is the intimate spark that ignites a cascading transformational effect throughout society. Suddenly a lot of people have a real stake in the economy and finally true purpose in life. It’s an extraordinarily powerful example of ordinary South Africans setting the example that we can actually work together and achieve success as a nation.

Maybe most importantly, that we can trust and respect each other, providing that yarn that stitches together the torn fabric of our battered society, as we build new, more prosperous and stronger communities.

Although Perspective will publish gladly, the views are not necessarily that of PALS who will respond to comments if deemed necessary. We also welcome your comments on these comments. Write to Perspective at: editor@sapals.co.za