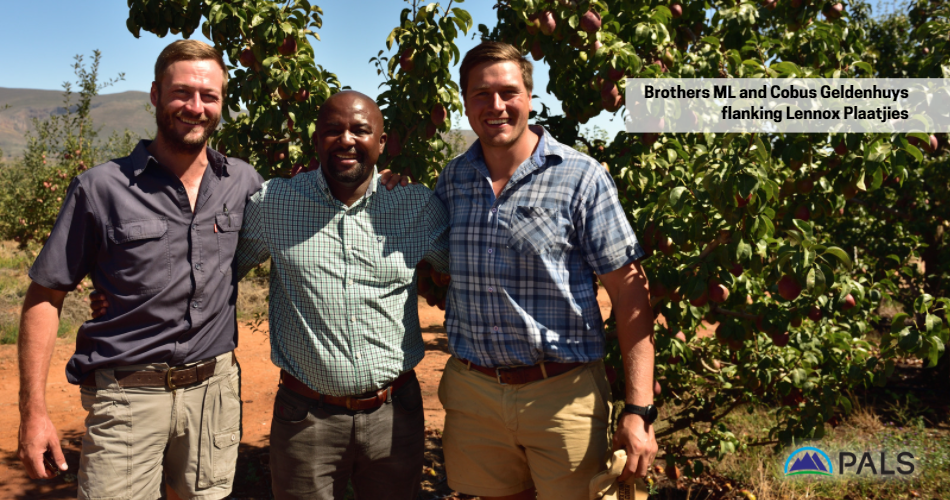 Shortly after Witzenberg PALS was formally established in 2014, Gielie Geldenhuys from Rheeboksplaat Farming Nominees near Ceres approached them. He felt he had a social and moral duty towards land reform. And he knew the government was not going to help. That’s when PALS introduced him to Tommy Mona, known to most as oom Tommy. Respectfully.

Oom Tommy was originally from the Eastern Cape but has been living in Ceres for 35 years, doing contract work for farmers. He was a pastor, chief of the Xhosas in the Western Cape and a director of Witzenberg PALS. Gielie and oom Tommy bonded like bread and butter from the beginning which led to the establishment of Bambisane Farming, with 51% allocated to oom Tommy and Gielie with 49%. Gielie subdivided 1 000 ha of his land to farm it with fruit and livestock. After three years of struggling to get funding from amongst others, the government and the Land Bank, FNB finally helped them with a loan and a donation.

The future looked brilliant. Black and white. Hand in hand. A dream for Gielie and oom Tommy come true. Partners into the future. Then unexpectedly, unnecessarily and unplanned oom Tommy died. He never really saw his first harvest.

His children were devastated but not geared to take his place. There lives were already well-established in other directions. But there was Bambisane Farming, with 51% looking for a home in order to keep going. This was going to be a severe test for the concept of partnerships, the foundation of the PALS philosophy.

Introducing Lennox Plaatjies, or rather re-introducing Lennox, he is an old warhorse operating in the PALS stable. In fact, he was the CEO of Witzenberg PALS from September 2015 to April 2018. Gielie approached him and asked him to help him with this vision and to keep it inclusive. Lennox and the workers’ trust formed an entity called Masiphile with Lennox holding 60%  and the trust the additional 40% shares in Masiphile which in effect is the replacement of oom Tommy’s 51% of Bambisane.

Gielie started it all and one of the criteria of the PALS formula is that the mentor farmer must invest expertise and knowledge into the project. That he is certainly doing. In fact, two of his sons, Cobus and ML are now spearheading the operations on the allocated farm Slangfontein after oom Tommy passed on. And Gielie and Lennox are mentoring and managing.

The show must go on. And indeed, so it is.