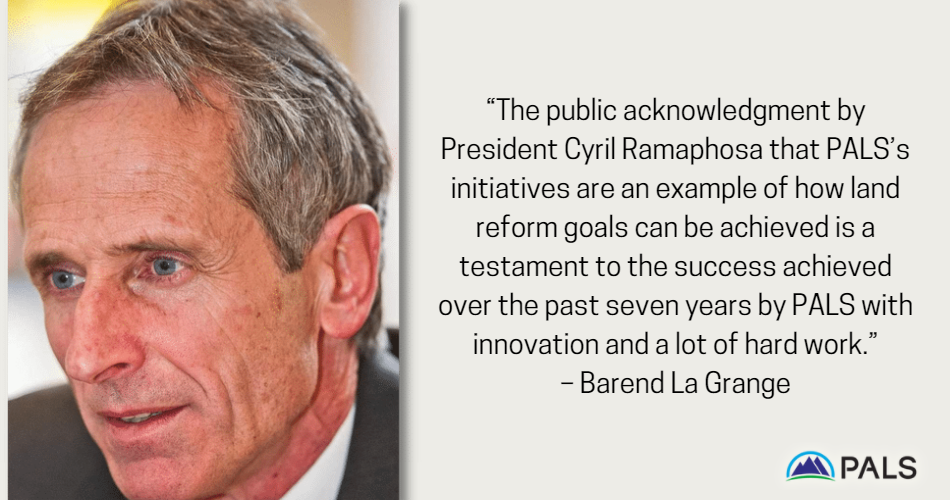 This is the column where Perspective asks well-known opinion formers to give their views on PALS and its mission. Although Perspective will publish gladly, the views are not necessarily that of PALS who will respond to comments if deemed necessary.

Barend La Grange is the chief operating officer (COO) of Privilege Foundation, aiming to look after the interest of children. Previously he was the COO of the registered non-profit organization, South Africa Day, an initiative to promote nation-building and a better future.

Barend recently visited PALS Witzenberg in Ceres and said afterwards: “I was aware of the PALS model, but the real realization of how successful this initiative is already and the impact it has as a model on how land reform can be further expanded in a practical and sustainable way only became clear last week with my visit to Ceres and the environment and conversations with all the role players. Visiting nine of the PALS projects and engaging with the black and white farmers was an eye-opener.” (Read more about it elsewhere in this issue.)

What is your perspective regarding the effectiveness and success of PALS in terms of the following angles?

With our history where everyone in South Africa did not have equal opportunities to own land and produce food, land reform is undoubtedly the most important political agenda item.

However, land reform is not a simple matter. This is evidenced by the many unsuccessful attempts over the past number of years.

However, with its inclusive approach and clear plan, model and proposed structure, PALS has placed confidence that it is possible to bring together emerging farmers and established commercial farmers as partners and shareholders. The right approach was followed to consult with the local communities, the local and provincial authorities, to the highest level of national government. The procurement of all role players and interest groups was of cardinal importance.

This allayed initial mistrust and the fact that the PALS framework fits in perfectly with the National Development Plan (NDP) further strengthened confidence that this initiative should be expanded nationwide. The public acknowledgment by President Cyril Ramaphosa that PALS’s initiatives are an example of how land reform goals can be achieved is a testament to the success achieved over the past seven years by PALS with innovation and a lot of hard work.

Profitability is the key in the long run to execute any land reform on a sustainable footing. The transfer of land and production are not separate from each other. Innovative well-thought-out projects such as PALS contribute to sustainable economic growth, ownership and job creation. The model, which is also based on mentoring and training emerging farmers, will further stimulate the sustainability of inclusive economic progress.

Transformation in South Africa is a process, a long process, but in agriculture an even longer process due to the nature, complexity and importance of the matter. Transformation and food security go hand in hand. There is no easy and fast way. Radical economic transformation is not the solution, but the PALS partnership-driven land reform model has proven that since its launch it has been the most successful and sustainable plan to finally establish a class of profitable black farmers who can serve as an example to the rest of the country. Real transformation is – where social cohesion is also promoted in the process – established black farmers.

Although Perspective will publish gladly, the views are not necessarily that of PALS who will respond to comments if deemed necessary. We also welcome your comments on these comments. Write to Perspective at: editor@sapals.co.za