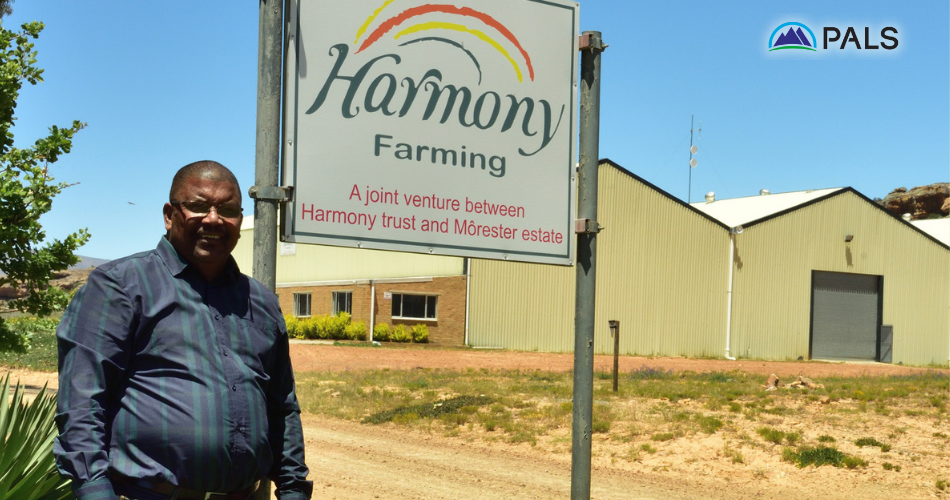 Hein Jurries is today the chairman of the trustees of the successful empowerment farm Harmony in the Koue Bokkeveld and a board member of PALS. It all began because he needed to take at least six subjects in high school.

“I took Agriculture as a subject, never even dreaming I’d become a farmer, but I didn’t know what else to take,” he begins his story. However, after finishing matric with good results, it earned him a bursary to study further at Kromme Rhee Agricultural College. After completion of his two years in 1990 he was offered a post of production foreman at Morester in the Koue Bokkeveld. And so his long road and friendship with Naas van der Merwe began.

Naas and the management of Morester saw the potential in Hein and sent him back to college to do a farming management course. After that he was put in charge of his own fruit production section. “It was a big challenge, but by now I was hooked on agriculture!” Hein reckons.

In 2002 Naas, the Morester management and the permanent workers started talks around the hot potato subject of empowerment, land repatriation and transformation with the focus on Harmony, a farm adjoining Morester and already part of the Morester stable.

In 2006 Land Distribution for Agricultural Development (LRAD) granted the funding and the board of trustees, under the chairmanship of Hein, bought the farm. However, owning a farm doesn’t make you a farmer. You need infrastructure, water and know-how. To make it work Morester and the trustees formed a joint venture called Harmony Farming. (A typical PALS structure already, about eight years before the formulation of PALS.) Morester supplies the infrastructure and mentorship while the trustees supply the farm and doing the work. The profit is split 50/50.

In 2018 Harmony Farming became part of PALS. Maybe one can ask if it was necessary to join PALS if they’ve been running the same basic formula for 12 years already. Yes, absolutely, Hein would tell you. On the one side, with PALS on board, the Harmony formula became even more in tune. The clout it brings in terms of new development like Harmony planning a new fruit project for which they will need more water. Enter PALS with a lot more knowledge and experience in negotiating water rights. A shortcut to getting the fruit trees up and bearing. With PALS as part of the mix, their expertise in terms of negotiating, planning, structuring frees the farmers up to do what farmers do best. Farm.

In addition, Harmony Trust and Morester are at present both 50% shareholders in Harmony Farms, the business. The future goal is to slowly but surely swing that shareholding towards a 100% for the Trust without dropping the baton. Now we are talking PALS expertise.

“And on the other hand, with more than 15 years in this structure, we can add some insights to PALS too. Naas might have retired now, but he still has a lot of wisdom to share,” Hein conclude. (Read some more of  the Naas wisdom in the Intro of this edition.)

Then, all in all, it is not a surprise that Hein became a director of PALS in 2020. Just because he took Agriculture by chance as a subject in high school.