IT IS an honour and a privilege to address the Annual General Meeting of the Witzenberg Partners in Agri Land Solutions (PALS).

It is a welcome opportunity to exchange views, experiences and insights on the critical matter of transformation through agriculture and land reform.

As we seek to transform agriculture, we are painfully aware of the scale of the challenges we must overcome. For generations, agriculture has been a site of inequality, landlessness and exploitation.

The wholesale dispossession of the land of black South Africans and the associated destruction of the skills base of African farmers, combined with discriminatory apartheid laws, weak land administration and the lack of labour protection, has led to severe economic and social inequality.

It also led to a complex tenure situation, which was amplified by separate coloured reserves and hundreds of thousands of black households residing on white commercial farms without tenure security.

Around the Western Cape, slave belts on various farming estates remind us of the cruelty, inhumanity and barbaric practices on which our agricultural sector was founded. Much has changed. But too much remains unchanged. Land reform therefore holds huge political, historical and economic significance in our fledgling democracy.

Our constitution obliges the state to improve tenure security and to pursue restitution for those dispossessed of land in the past.

Though we have made important progress in land restitution and redistribution since 1994, we must acknowledge that this process has not lived up to the expectations of historically oppressed South Africans.

We have not significantly altered patterns of ownership of agricultural land, nor contributed sufficiently to job creation.

We have not deracialised agriculture, nor transformed rural communities.

Agriculture is not only affected by political and social turbulence.

The impact of the devastating El Ninô weather cycle is still being felt.

The hardest hit are the marginalised rural poor here and in many other parts of the African continent.

The Western Cape is reeling from the effects of climate change, with dam levels remaining stubbornly low.

In doing so, it responds to the call in the National Development Plan for an active citizenry working together to address common challenges.

To transform our economy and promote sustainable and inclusive growth, we need to focus on improving our agri-food system.

We need to increase agricultural productivity.

The National Development Plan says that the agricultural sector has the potential to expand productive land by one million hectares and to create one million jobs by 2030.

However, the agricultural sector’s contribution to the economy is currently shrinking.

We have not been able to fully unlock its growth potential or realise the contribution it could make to rural development, food security and job creation.

Deliberate actions must therefore be taken to accelerate agrarian reform and to bring the marginalised poor into the economic mainstream.

It is productivity growth in agriculture that provides the food supply to meet the demands of urban growth and transformation, and releases labour to other sectors of the economy such as manufacturing and services.

Inclusive rural transformation is, in turn, influenced and shaped by the growth and diversification of the demand for food supply and raw materials from the urban economy.

The diversity and scale of our food system remains vulnerable as long as the majority of black farmworkers remain on the periphery of commercial farming and the larger economy.

If the momentum for inclusive rural transformation is to be sustained, agriculture must evolve and modernise.

Smallholder producers and rural SMMEs must be supported to make the transition to greater specialisation and diversification in production and trade.

We need to develop agro-processing and facilitate access to markets for emerging farmers.

This means that we need to deal with unequal access to productive resources and inadequate access to financial support.

The transformation of the economy requires the active participation and empowerment of women.

To advance women’s equality, we must do more to support independent black women farmers and women-led co-operatives.

Agriculture also has a significant role to play in reducing youth unemployment.

We carry the responsibility to promote farming as an attractive, rewarding and viable enterprise for our youth.

We need to harness their energy and ignite the imagination of young people to be a seed that will spawn new agricultural industries.

Apart from skills transfer and supporting emerging farmers, we must be invested in research and technological innovation.

It means taking interest and getting involved in curricula development at our agriculture colleges and universities.

It means establishing bursaries and internships to nurture young black talent in farming and enterprise development.

We need to build consensus around land reform and transformation.

To successfully advance transformation, it is important that in their design and implementation, initiatives like PALS take on board the interests, concerns and suggestions of broader community.

Initiatives like PALS need to be inclusive, transparent and accountable.

We must always bear in mind that we are dealing with a national asset in which all South Africans have a stake.

We urge the members of PALS to look at measures that can effectively increase the participation of blacks in upstream and downstream activities.

How do we work together to meaningfully reduce the concentration of ownership, promote healthy competition and reduce the barriers to entry for small-scale black farmers?

How do we ensure that emerging independent black farmers are supported and that they are able to run viable businesses?

How do we work together to ensure equitable access to water rights consistent with our determination to ensure that development and transformation are prioritised?

How do we work together to combat evictions and the abuse and exploitation of farmworkers?

These are issues which I urge the members of PALS to grapple with.

Unless we attend to these broader issues together – in a spirit of mutual trust and collaboration – initiatives like PALS will be seen by many of those affected as amounting to little more than fine words and noble intentions.

The reconstruction and development of South African communities is a responsibility we all share.

Farm owners have a role to play in the fight against social ills like substance abuse and crimes committed against women and children.

Lack of social infrastructure and amenities fuel the spread of disease and affect productivity and quality of life.

By working together, through dialogue and collaboration, by responding constructively to criticism, we can ensure that it becomes a powerful instrument for meaningful and far-reaching transformation. 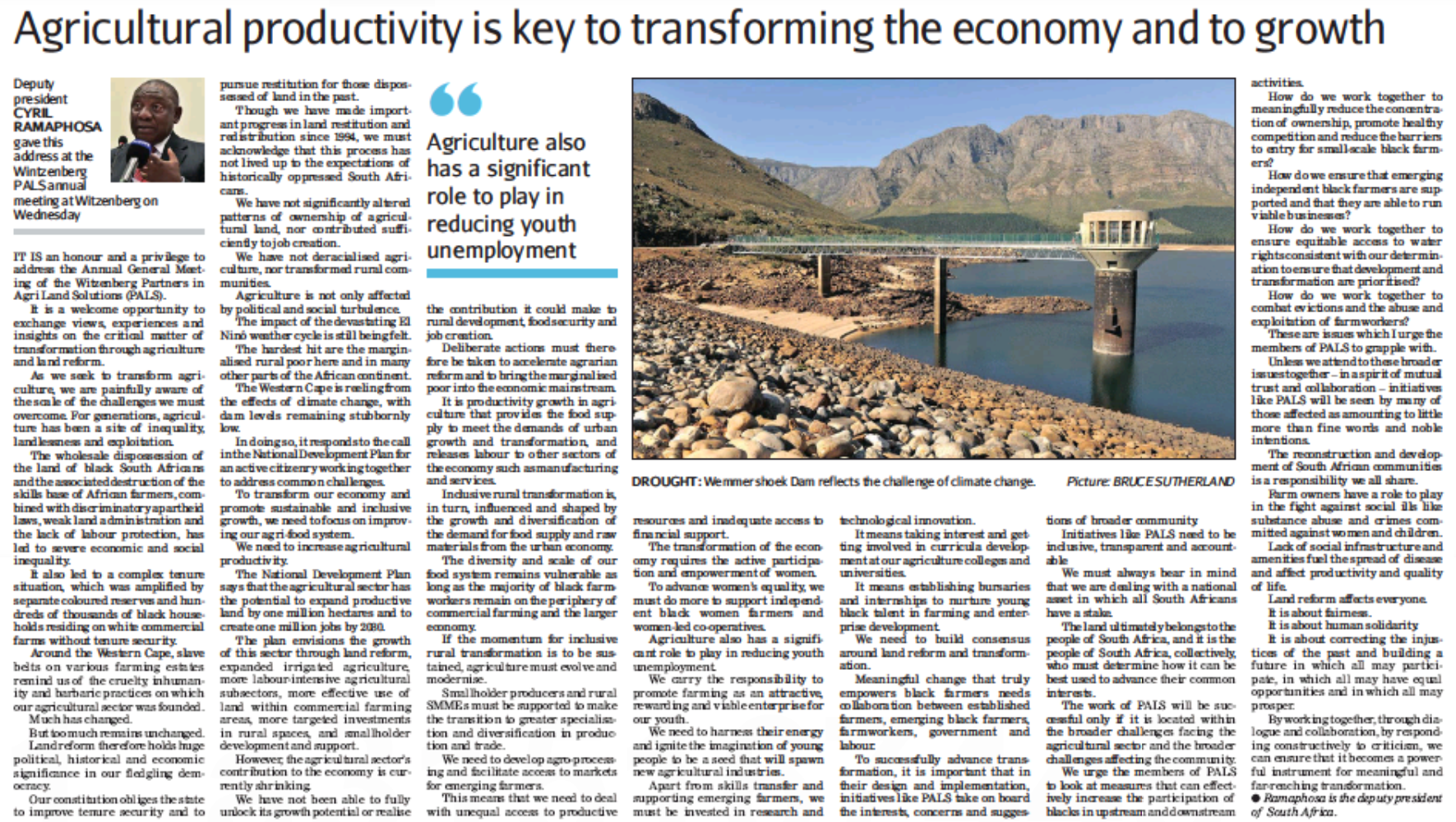